$500 Sin With Me Release Day Giveaway 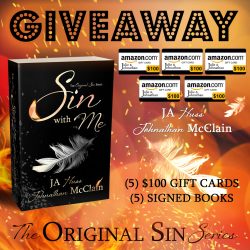 ⬆ CHECK OUT OUR TRAILER ⬆

It’s time, you guys! Our FIRST BOOK RELEASED TODAY! As an added surprise, I have a special audio sample for you to enjoy as well because by now you know that Johnathan has a secret identity! He’s a narrator under the name Tad Branson and he’s the voice of TYLER in Sin With Me! Joining him in this track is the spectacular Ava Erickson as Maddie! if you’re an audio fan like I am, you already know how great they are, but if you’ve never heard Ava and “Tad” – just press play below! (Warning, Not Safe For Work Or Kids! So be warned!)

Two broken people in a city fueled by sin.

Maddie isn’t looking to be saved. She knows the only person you can count on is yourself. Her moral compass might not point true North these days—but at least she’s still standing.

The military taught Tyler about loyalty. Being there for your brothers is the only thing that matters—but when it mattered most, he wasn’t.

She’s got a ticket straight to Hell. He’s already been there and back.

She needs to win. He just needs to stop fighting.

Some sins scar your soul so deeply, you’ll never be the same.

But this Devil in disguise might just be the angel he needs to forgive himself.

His hand slips around the curve of my ass, squeezing it so hard, I bite my lip to stifle a whimper. His fingers press into my skin, grabbing hold of me like he might never let go.

His tongue laps against my pussy, then flicks my clit. I fist his hair and let my head fall back—pressing against the brick wall. He does this little move with his tongue. Teasing me as he swirls it around, presses his mouth firmly against my clit, and moves it back and forth so quick, I drop a hand down to his shoulder and dig my nails in. Like I might never let go either.

It’s been a while for me. Too long, really. And I can feel the climax building and building, and then—

“There’s no people,” he counters. “And I want to be inside you when you come. I want you to be fucked as much as possible before I let you finish.”

“Hey,” I say. I really need this guy’s real name. I can’t keep calling him that. Especially during sex. “We gotta hurry. I’m at work and—”

“You’re not at work. You’re with me, Scarlett.”

And I really need to tell him my name too. Because I feel like I’m morphing into Scarlett. This is the kind of thing she does, not me.

He lifts my legs, still pushing me against the wall, repositions them so they drape over the crook in his arms. He’s holding both ass cheeks, squeezing them hard and pressing against me with his hard cock. But we’re eye level and I’m looking at him like… like we’re something. Like maybe I am with him.

He grins. A devilish, mischievous grin. Says, “How do you like it?”

“Like it?” I say, my eyes darting around to make sure no one can see us.

“Scarlett,” he says, demanding my attention. “Look at me. And tell me how you like to be fucked.”

He laughs. “Roger that. Anything else?”

“Just…” I start. Because I’m not really into the dirty-talking shit. I’m not into alley sex, or wall sex, or giving blow jobs for money. But I’ve done all those things since I met him. Last. Fucking. Weekend.

So fuck it. I’m Scarlett now, I guess.

I take a moment to wonder how much difference there is between filthy and dirty.

“Scarlett,” he says, pushing his stiff cock up to the entrance of my pussy. God, I’m wet. And the way he’s teasing me has my whole body trembling. “Tell me how to fuck you. Because if you don’t, you’re just gonna have to get it the way I like to give it.”

⬇ CHECK OUT OUR GIVEAWAY ⬇

Two accomplished writers come together to create unforgettable sexy romance. JA Huss is the New York Times bestselling author of 321 and has been on the USA Today bestsellers list eighteen times. Johnathan McClain is a veteran actor and writer whose work, either performed or written, is probably airing on at least one of the channels on your television right now.